Set against a bright colourful background adorned with intricate ornamentation sits a poised African American individual. The manner in which the figure sits or stands is familiar. The subject is unflinching, meeting whatever gaze wanders upon their painterly face. Kehinde Wiley’s unique compositions are immediately recognizable.

Wiley’s inspiration draws from classical European painting, which typically captures the drama and triumph of a particular moment. These illustrations of history are retold and monumentalized in textbooks, museums and, most importantly, subconsciously, profoundly influencing who we are as Westerners today.

Yet, this particular strand of art history is notoriously intertwined with a racist rhetoric that has systematically excluded people of colour, along with other non-white groups of people. What happens then, when Wiley appropriates the traditional iconography of European painting with contemporary black figures such as Obama, Ice T, Spike Lee or the Harlem passerby?

The answer is complicated, which is why Wiley’s pieces have become so popular and sought after as conversations surrounding decolonization and gender equality proliferate in the media. Wiley employs the ability of paintings to mythologize people, places and events, a considerate feat seeing as history has systemically attempted to eradicate non-white bodies. As seen in classical art, where non-white individuals are depicted as objects, never subjects.

Wiley embellishes his portraits with flowers and golden details which is reminiscent of interior design and craft, mediums that are traditionally associated with femininity. This artistic choice is meant to question the troubling gender dichotomy, a split that attempts to hyper-masculinize men and legitimizes the disenfranchisement of women.

Wiley gained notoriety in 2015 when he was granted a solo exhibition at the Brooklyn Museum untitled, Kehinde Wiley: A New Republic. In 2018, he was commissioned to paint President Barack Obama for the President’s Collection at the Smithsonian Portrait Gallery in Washington.

This month, Wiley released a new print, entitled, Head of a Young Girl Veiled, 2019 where all proceeds will go to “Black Rock”, an artist residency program in Senegal. 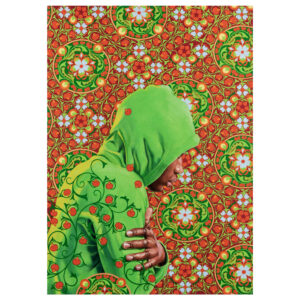