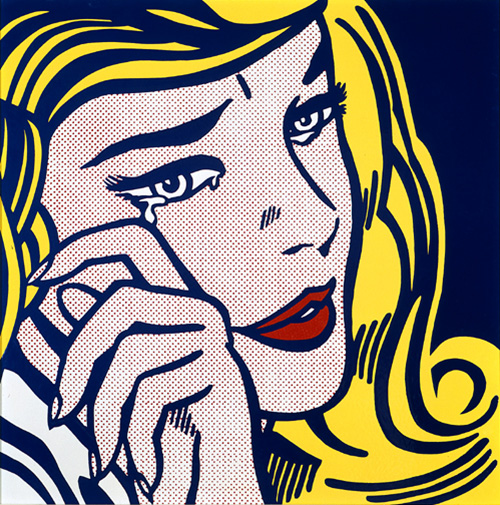 Roy Lichtenstein was an American pop artist famously known for his comic-inspired work which played a vital role in the Pop Art movement of the 1960s.

Lichtenstein was born in Manhattan, New York in 1923. He left New York for Ohio State University to study Fine Arts, though his studies were interrupted for three years due to his Army enlistment in World War II. After the war, he finished his Bachelor’s degree and went on to obtain a Master of Fine Arts at Ohio State University. He was later hired by the university as an art instructor.

After nearly a decade of working and living between Ohio and New York City, Lichtenstein moved to upstate New York where he adopted an art practice in reaction to the Abstract Expressionist style. Instead of painting abstract works devoid of subjects, Lichtenstein took his imagery directly from comic books and advertisements.

The 1960s marked the height of Lichtenstein’s international fame. He moved back to New York City and painted his most famous works including Drowning Girl (1963), painted from a story in DC Comic’s Secret Hearts #83. Many critics questioned Lichtenstein’s originality since his works were near replicas of existing comic book panels. He always stood by his work and legitimized it by claiming its ability to take low art and elevate it to a high art context.

In 1964, Lichtenstein was the first American to exhibit at the Tate. In the following years he exhibited at other institutions throughout Europe. During this period, Lichtenstein also reproduced masterpieces by Picasso, Cézanne and Mondrian, recreating them with his own unique, hard-edge style. Later in his career he also reproduced works by Van Gogh, as he was continually inspired by art history.

Lichtenstein worked on many commissions as well including a Pop Art bedroom suite at the Palace Hotel in St. Mortiz, a BMW Art Car, the DreamWorks Records logo as well as public works in Barcelona, New York and other cities throughout the United States. Today, his work can be found in the collections the of the National Gallery of Art, Washington D.C., the Art Institute of Chicago, the Museum Ludwig in Cologne and the National Gallery of Australia. In 1999, the Roy Lichtenstein Foundation was founded which holds hundreds of his works.